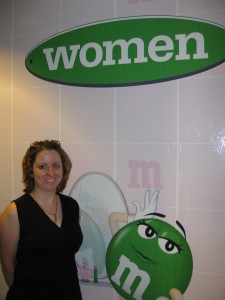 I do enjoy a good bathroom. This fun women’s room entry is found at the M&M store in New York. (I also enjoy a good M&M. Or any M&M, really.)

I was using the so-called “courtesy flush” long before I knew it had a name. Flushing something particularly odorous quickly or flushing to mask the sound of flatulence are common reasons for the courtesy flush. You might use this tactic at a friend’s house or even at home, but most often it’s used in public bathrooms, especially those that are not well-trafficked.

Anyone who has inflammatory bowel disease (IBD) has used the courtesy flush. Maybe there are some who couldn’t care less what the person in the next stall hears or smells, but others feel some embarrassment.

Every so often, it’s not me doing the courtesy flushing, but someone else. It’s not as though I travel from restroom to restroom with an interest in what I might see or hear, but I’m not particularly bothered by someone else doing the thing that we must all do in one way or another. It is what it is, and better out than in.

Sometimes I wish I could say something to the woman in the next stall, dutifully utilizing the flusher in order to spare my ears. “It’s OK,” I’d like to say. “I don’t have a colon. When I eat anything other than a bland diet it gets interesting, and it’s not something I like to share, either. But you don’t have to worry. I would prefer that you feel better, that you concern yourself with your own health and how you’re going to get through the day rather than what I might think of you.”

But, of course, I don’t say these things. We have a social contract when we’re out in public, and the courtesy flush, along with not talking to a total stranger through a stall door, are addenda. Instead, I do what must be done, wash my hands, and get out of her way. If I can’t say those things to her (which would probably not really put her at ease anyway), then I might as well just get the hell out of her way.

I can only hope that someone hearing me courtesy flush will extend the same…courtesy…for me.