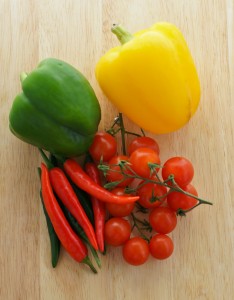 When my ulcerative colitis was at its worst, raw fruits and vegetables were not in the picture.
Image © Tanya Hall

Diet has become a major topic of discussion for many people in the Western world. Most of us are overweight. We develop diseases from being too heavy, and yet many people spend a lot of time and energy dieting or thinking about how to lose weight. Since getting a j-pouch, having 2 children, and turning 40, I find myself amongst those that have to pay close attention to diet in order to avoid gaining weight.

In the IBD community, diet is discussed a lot, but there is no real conclusion. People with IBD can be anywhere on the spectrum of “diet has no effect on my symptoms” to “diet is how I keep symptoms from coming back.” The biggest problem is that you don’t know where you fall on this spectrum until you try different diets. And there are so many to choose from: no milk, no carbs, no meat, no animal products, no cooked foods, no gluten. Which one, or which combination, will have benefit for you?

Well, the short answer is: no one can tell you. The only thing we know is that you have IBD. We don’t know anything beyond that. We can guess at what treatments might help you best, but we don’t know for sure. We know even less about diet because it’s not routinely studied.

Why Isn’t More Known About Diet And IBD?

With the long history of IBD, and with it being a common condition, one would think that how to treat IBD nutritionally would be a known quantity. But that’s far from the truth. Many physicians don’t give any advice about diet, beyond perhaps recommending supplementation. Nutritionists can give very good advice about how to eat more healthfully, and which foods might be easiest to digest, but that still might not tell a specific individual what foods will and won’t work for them.

Diet is difficult to study. In many cases, diet is studied retrospectively. Which means that you take people who have developed a disease or condition and you ask them about what they ate in the months and years prior. Who can remember that much information? Sure you’ll remember how much coffee you drink on a daily basis, but can you really recall how many times you ate any particular food, or ate white bread versus wheat bread, or ate Romaine lettuce versus iceberg? Therefore, many experts tend to take these studies with a grain of salt. Now, the way you get around some unreliability is by taking a large sample size. Which means that you ask thousands, or tens of thousands of people. That works out better, but finding actual causations is like searching for the proverbial needle in a haystack.

So Diet Does Or Doesn’t Cause IBD?

A story by the BBC made a big stir in the IBD community when it quoted a gastroenterologist as saying that the increase of IBD in recent years may have been due to the ingestion of “junk food.” People with IBD took offense, and the gastroenterologist wrote a retraction and an apology. If her words were taken out of context, we’ll never know. It’s certainly not the first time a journalist has gotten something wrong in an article about IBD.

The biggest problem with the story the BBC ran was that it seemed to blame people for developing IBD. Of course, we know that young children, even babies, develop IBD. Athletes and people who eat raw or vegan diets can develop IBD. “Junk food,” or the other named culprit, antibiotics, aren’t going to explain away every single case of IBD. What’s more, if the “junk food” hypothesis were true across the board, how to explain people who developed IBD in previous decades, and even in previous centuries?

Now, what’s notable about this situation is that soon after it all blew up on social media, I was made aware of a study that proposed a link between diet and the development of IBD (Etiology of inflammatory bowel disease: a unified hypothesis). The author of the study, Xiaofa Qin (@FindCauseOfIBD), tweeted a link out and pointed to sucralose (marketed under the brand of Splenda) as a possible causative agent for the development of IBD. Qin pointed out that sucralose was approved for use as a food additive in the UK in 2002, a date after which hospital admissions for IBD increased.

This would be just as predicted by my paper (http://t.co/ibxxaKfKll). Again, it occurred shortly after approval of sucralose in UK in 2002.

Is There A Place For Blame?

Does this mean people ate foods or drank drinks containing sucralose and therefore developed IBD? It’s impossible to say. Sucralose is a food additive, but I would say it’s far-fetched to call it “junk food.” In fact, it’s probably used most by people who are interested in lowering the calories of the foods they eat, in order to avoid gaining weight and developing other problems. It would be fair to call foods that contain sucralose “processed foods” and it would also be fair to say that many of us (but not all!) know that we should avoid processed foods as much as we can.

If there is a place for blame, it shouldn’t be placed on the people who develop IBD or other conditions. If there’s someone to blame, it is those who develop, approve, and put additives into food. Claiming that food additives are safe to use, when it’s clearly not known what the long-term effects are. It is very hard to avoid processed foods and food additives, even in non-food items. It took me weeks to find a toothpaste for my children that didn’t have any dyes or additives in it. It’s almost impossible to find foods and beauty products that don’t contain vague labeling such as “flavors,” “spices,” or “perfume.” What do those words mean, exactly? Your guess is as good as mine! For people who have allergies, sensitivities, or who just want to avoid additives, it’s a tricky road, and one that’s easy to veer off quite by accident.

So Where Does That Leave Us With Diet And IBD?

We don’t know if diet triggers IBD. We don’t know how diet affects IBD. What is fair to say is that people with IBD need more guidance on their diet. Eating a diet consisting of whole foods, or as few processed foods as possible, is, in most cases, a good idea. Meeting nutritional needs safely, with the restrictions that IBD puts on diet, is also necessary. How we go about achieving these goals, and who helps us do it, is still a matter of debate.

As far as diet triggering IBD, we know that IBD is in our genes. We are born with the genes that could — if triggered! — cause us to develop IBD. If it’s in my genes, it’s in the genes I passed on to my kids. We don’t know what could possibly trigger IBD, or if it’s multiple things that cause IBD, or if there’s anything we can even do to avoid triggering IBD. But I know what I’m doing, and I’m feeding my children with fresh, whole foods as much as I possibly can. I bake their birthday cakes from scratch, I give them water to drink, and I put fruits and vegetables on the table at every meal and snack. As much as I am able, I avoid putting chemicals on them, in them, or in their environment. I let them play in the dirt. They go outside most days, even if they don’t want to. Will all this help them? I have absolutely no idea. It’s possible I could be wasting my time, that what I do doesn’t matter, or that I’m doing something that I think is best for them when only time will reveal that it is not. But, in the meantime, they will hopefully develop a love of fresh whole foods and an appreciation for the outdoors, and those things, we do know, are good for them.