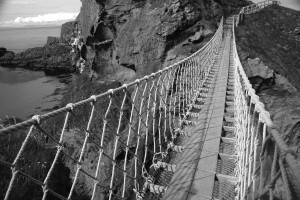 The way forward looks treacherous. But we must work together to find our way across.
Image © Sean Kearney

I had a recent revelation as I was planning an event for a group I volunteer with for one of my children. I am a volunteer, as so many parents are, and I spend a fair amount of time working with other parents and within the community to plan fun and educational events for our kids. But I am beginning to wonder if this is the best use of my time and if it’s providing the best experience for my children. And then it hit me – my thoughts were directly related to advocacy for chronic illness.

OK — Why Am I Doing This Again?

I volunteer with various organizations that my children participate in and with the schools they attend. Most parents do one thing or another – we join the PTA, we bring snacks for parties, we spend time organizing events or shelving library books. It’s just something that parents do through the course of their children’s lives, especially when the children are younger. Having a pool of many parents who each do their own little part makes organizations run more smoothly and allows groups or schools to use the time of paid employees or to use money more effectively.

In some cases, however, the volunteering becomes a little one-sided. Some parents find themselves being only one of a handful that comes in to help with the book fair or plan the holiday party. It’s often the same people over and over, and their time starts to get short until more parents can be convinced (cajoled? guilted? coerced?) into helping even just a little.

I’m not saying I’m one of that handful, but I do try to do my part. In the course of planning one recent event, my husband and I probably spent anywhere from 10 to 15 hours preparing for a 1-hour activity that included one of our children and, of course, dozens of others. There were other parents doing their part, as ours was just one section, but for a few weeks it took over our lives. And then, before I knew it, the event was over, and it was time to plan for next month.

What I realized was that I spent 10 or more hours planning this event, for my child and others, and I was not actually spending that much time with my kids. They were being cared for by others, or were amusing themselves in some way, while I was busy planning events. And it’s not as if this is an isolated incident – there are certain things that we do on a regular basis, and meeting with other parents and planning the events goes all year round.

The IBD Community Is Underserved

I was then struck by the thought that this is also occurring within the IBD advocacy community. IBD advocates are planning campaigns, raising money, and putting programs in place, but they’re not actually spending any time with the IBD patients in the community.

This isn’t occurring with all advocates, or even with all advocate groups, but I think it does occur with some companies organizations. This is not to say they aren’t doing great things – where would we be without programs and research? We wouldn’t get far in the understanding of complicated disorders like IBD.

Even though those in non-profit groups and companies create products in support of IBD patients seek to “do good” – and often do just that – there is this widening disconnect between what they do, and the people that they do it for. How much time is spent organizing programs, creating apps and web sites, and planning fundraisers, and how much is being spent actually talking to, and interacting with, the people who need the help?

Just like I am spending my time rushing around planning events for my kids but not actually being with my kids, some groups are planning their next campaign without asking patients about their needs or their expectations. Obviously advocacy is necessary and needed, but the question is, is everyone going forward in the most effective way?

How Can We Find A Better Way Forward?

I can think of several ways in which those who serve the IBD community can improve their effectiveness and include more of the things that patients find useful:

I don’t think we need abandon advocacy or volunteering – far from it. These things are needed in our society and, in fact, we need more of them. If another parent had offered to help me (or, indeed, to be fair, if I had asked for it), perhaps I could spend less time planning for my children and more time doing things with my children. It is the same with advocacy: more voices and opinions might make the road bumpier for a time, but it will also widen that road and make it longer. Those of us with IBD are already traveling that bumpy road, many times without direction or even a glimmer of where it might end. It’s time to take advocacy into the next phase, and give both deserving IBD patients and IBD advocates a GPS system and a final destination.

4 thoughts on “The Dangers of “Too Much” Advocacy”