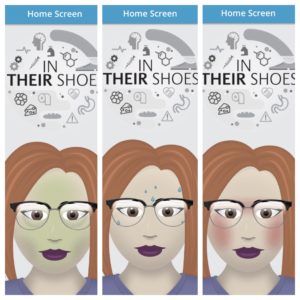 The avatar for the program is customizable (it looks like me, right?) and it changes based on the challenges. Feeling poorly (looking green), sweating (experiencing a sign or symptom), and blushing (feeling embarrassment) are all situations that are experienced during the simulation

Takeda Pharmaceutical Company contacted me and offered me the opportunity to participate in a program that they’d developed which simulates the experience of having inflammatory bowel disease (IBD). The program was being used internally to help Takeda employees understand IBD better and was now being rolled out to participants outside the company. IBD is an exceptionally isolating disease and research shows that it is associated with a high degree of stigma in the public perception.

I was immediately intrigued with the prospect of this program: my first thought was that I couldn’t imagine what this might look like. My second thought was that it sounded like an innovation that could change how participants view IBD and impact their work as health care professionals, industry representatives, and legislators. The program is called “In Their Shoes,” and the full session takes 2 days, but I participated in an abbreviated, 3-hour variant.

There’s an App for That

At the heart of the program is the “In Their Shoes” app that participants download to their phone. It was developed in Zurich in 2015 with input from people with IBD. The app is the guide through the process of living a day in the life of someone who has IBD. The compliment to the app is the delivery of physical materials that are used during the day, via directives from the app that are called “challenges.” The items needed for the experience are mailed or given to participants and are used to help simulate the different aspects of IBD that occur during the day at the prompting of the app. For the purposes of this article, the challenges and the materials will not be described in detail because of the potential to weaken the effectiveness of the program for future participants.

Participants are also given an IBD primer: an hour-long in-person meeting with an IBD expert who can provide the basics about Crohn’s disease and ulcerative colitis and includes a question and answer session. More information about IBD and the “In Their Shoes” program is given via email and participants are guided through the process of downloading the app and setting it up on their phones.

The full program is completed over 48 hours. Think about what this means — going to work, going to school, relaxing in the evening, spending family time — all while coping with “Crohn’s disease.” For people who have IBD, bringing the disease along for the day is of course an inescapable reality: there’s no choice. For anyone who is not coping with a serious health problem on a daily basis, it can be quite a shock to endure the challenges for a day or more. It affects work, sleep, relationships, intimacy, meals, and even safety. This can mean being in a meeting and having to leave suddenly to cope with a symptom, working on homework with the kids while in crippling pain, having to pull over somewhere (anywhere!) on the way to work to find a bathroom within minutes. This is everyday life for someone with IBD and being thrust into the deep end without any prologue is disruptive and unsettling. And that’s rather the point.

The Overlay of a Patient Experience That’s Not My Own

I took part in an abbreviated version of the program, which was for 3 hours, between 9AM and 12PM on a weekday. I found the experience of participating in “In Their Shoes” to be difficult. There are several reasons for this, ranging from the straightforward to the emotionally complex.

The patient profile I adopted for the duration of the program was quite affecting. This person was extremely ill and in quite a serious situation with Crohn’s disease. Because I’m a patient myself, and I’m close to other patients who have been in similar disease states, it was a moving and humbling experience to think about inhabiting that skin. In fact, the app directs the participants to consider the physical and emotional state of the patient persona carefully and keep it in mind throughout the experience.

Participating in the program, even for 3 hours, was, in short, annoying. I would sit down to work and be interrupted by a challenge. The challenges varied in their need for time and in the degree of participation necessary: a challenge could take a minute or it could take 10 minutes. This is all entirely appropriate because it approximates how IBD affects patients. And it’s annoying. But it’s only annoying because I was not actually experiencing any of the challenges: they were being simulated. If I were actually enduring the challenges in real life, they would be more than merely aggravating and keeping me from my normal workday, they would be incapacitating.

As the challenges moved on, they went from being exasperating interruptions to being the familiar, soul-sucking signs and symptoms of severely active IBD. At this point, near the end of the simulation, I realized that this was not an appropriate program for patients. It’s not meant for patients, of course, it’s meant for people who don’t have IBD so that they can better understand life with the disease. However, it was so powerful for me, as a patient who had once experienced the challenges in real life in my own body during my disease journey, that I wouldn’t recommend other patients attempt it. It was too overwhelming. As a tool for teaching others about what a day in the life of a person with Crohn’s disease might entail: it should be exceptionally effective.

Looking for the Helpers

I had several takeaways from my morning spent living inside the shoes of another patient. My first thought is, of course, that I’m grateful for the good days with my IBD and the freedom my j-pouch has given me. My IBD has been worse than it is now and it can always go there again. My second is the concern for the people with IBD whose disease is not being treated optimally and are coping with extreme symptoms of pain, diarrhea, fatigue, and the other life-limiting problems that come with IBD. I was reminded again of the challenges of uncontrolled disease and how damaging it can be to the body, the mind, and the soul, as well as to family life and career.

I was also overwhelmed that people at Takeda care enough about understanding the patient perspective that they developed this program and encouraged their employees and others to participate in it. Those who have taken the program come away with a deeper understanding of how IBD negatively affects people in their daily lives. This, in turn, will spur them to uncover new facets in their work that is in service to patients with IBD, whether it be in research and development, marketing, or patient outreach.

The effectiveness is indeed demonstrated by some of the realizations from “In Their Shoes” participants:

“The program has brought me to tears. I had not quite understood how the disease takes away patients’ dignity over and over again. I have gained so much respect for patients than I had in the beginning.”
-Specialist IBD nurse

“As a doctor, I thought I understood what patients went through, but I now realize I didn’t.”
-Takeda employee (Medical Affairs)

What’s more, Takeda is making this program available to select others outside of the healthcare space, including legislators. In the current healthcare climate, IBD patients face significant challenges in receiving the care they require and healthcare professionals often find their hands tied when it comes to providing that care. Legislation that works to strengthen the position of healthcare providers in supporting the choices that are made in conjunction with IBD patients is sorely needed. Legislators that have a deeper understanding of IBD on the patient level will have greater insight into the importance of patient-directed care in improving the lives of people with IBD and their families.

IBD is isolating and stigmatizing to a degree that is difficult to understand unless you’re experiencing it. That’s what In Their Shoes is about. People with IBD often feel lonely and as though there is no one who cares about their challenges. I took part in this simulation, in part, because I want others with IBD to know that the helpers are out there. Never forget: they’re working every day to understand and to improve our lives. Even if we don’t see them: they exist.

Takeda Pharmaceutical Company. “#InTheirShoes: What it’s like to be an IBD patient – how we’ve approached it.” Takeda.com. Accessed December 14, 2017.
https://www.takeda.com/newsroom/featured-topics/intheirshoes-what-its-like-to-be-an-ibd-patient–how-weve-approached-it3/