Members of the IBD Social Circle, Janssen Biotech, Tonic Life Communications, and gastroenterologists meeting at Digestive Disease Week 2014. I’m in the first row, fourth from the right. Everyone in this photo is an amazing IBD advocate, and I am privileged to have met them and worked with them.

Patients don’t typically get invited to medical conferences. However we are entering a new age of the “patient expert” — highly motivated patients who not only learn more about their disease for themselves, but share their knowledge with others.

In 2014, I was privileged to be invited to attend Digestive Disease Week in Chicago, and Advances in IBD in Orlando, courtesy of Janssen Biotech.

Attending a medical conference, for me, was both thrilling and terrifying, in equal measures.

Because I’m a medical writer, it was thrilling to attend these meetings and sit in on talks and discussions by and between key opinion leaders in IBD. People whose names I’ve seen for years as authors on the original research I read in order to write about IBD. People who have done the hard work to change my life — your life — and improve the course of IBD. To see them in the flesh, it was an IBD geek dream. Some of the physicians are now on social media, and I gobbled up their Twitter handles in order to keep in touch with them.

It was also terrifying. Honestly, who the hell am I to horn in on these meetings? I do understand a lot — after all, making medical jargon more accessible is what I do for a living — but there are also things that go right over my head. And it rather made me feel as though I don’t know shit about shit.

But the most overwhelming feeling of all was one of hope.

How I Found Hope At A Medical Conference

But that’s absolutely not true. I’m here to tell you — there are caring physicians and nurses who take the time out of their lives to fly to a meeting and learn the latest about IBD. There were so many health care professionals at Advances in IBD that I couldn’t get a seat at some sessions. I had to stand outside and listen as best I could. IBD is not an uncommon condition, but gastroenterologists also see a lot of other patients with a lot of other conditions. And yet, here they were, networking, learning more about the finer points of treating patients with IBD, working. Working hard.

I know this goes on and you are not aware of it as you are struggling through your day, wondering why a treatment isn’t working, or why the hell we haven’t figured out these diseases yet. This is why I am telling you now: there are many many people working to better your life. They hate IBD too. They want to know what treatments work best in which patients. They share knowledge about patients they’ve seen, so that the next generation can learn. They give up their time, away from their families and their practices, so that they can learn more about IBD. And those physicians on social media who I followed as quickly as I learned they were there? Some of them follow me back! And sometimes when I (or anyone else) tweet out a question about IBD — they answer it!

They care. So please know they are out there. In your worst moments, take some heart from that. IBD is a real pain in the ass, but good people are trying to eradicate it from our lives. 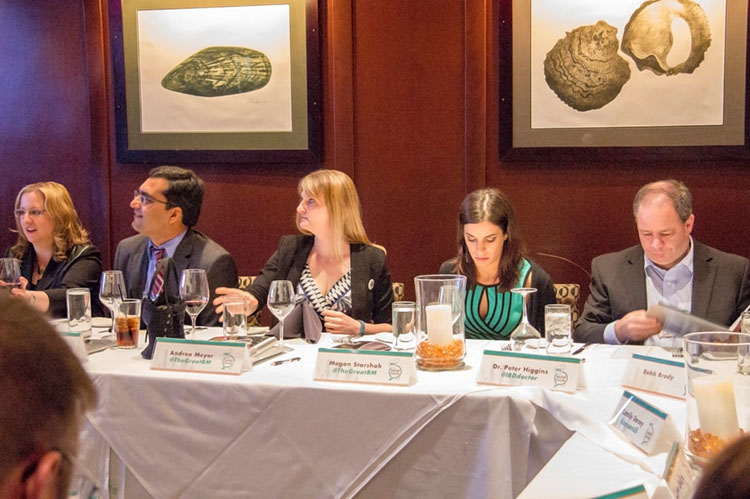 One of my geek out moments at Digestive Disease Week — I’m on the left, sitting between Dr Tauseef Ali, University of Oklahoma Medical Center, and Dr David Rubin of The University of Chicago (off camera, to the far left) at a dinner to discuss social media and IBD. Also pictured, from right, are Dr Peter Higgins of the University of Michigan, and Megan Starshak and Andrea Meyer of The Great Bowel Movement.

Disclosure: Janssen Biotech, Inc. paid for my travel expenses for the summit. All thoughts and opinions expressed here are my own.