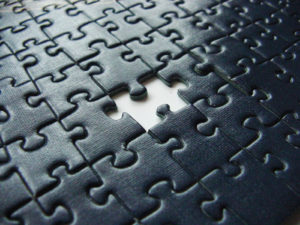 Is there always a piece of you that’s missing? Maybe a piece of information that you leave out when you meet new people. Do you keep your IBD secret because you might open yourself to problems at school or work?
Image © Pawe³ Windys http://www.freeimages.com/photographer/windys-39131

People sometimes tell me, “Oh, I’ve read your blog.” It’s often said almost sheepishly, as though it were something that were slightly distasteful or embarrassing. It does seem to take a little courage for people to tell me this, which also leads me to believe for every person who tells me this, there are others who are reading and yet never say anything.

For my part, I love it when people tell me they’ve read my writing. Especially when they don’t have IBD themselves or have a close friend or family member with the disease. While I do my best to reach people with IBD so that they have the information they need to make treatment decisions and live better, I also want to reach people who aren’t touched by IBD in order to recruit them as allies. After all, this is the very heart of awareness: people with IBD are already aware. We must reach those who have no reason to become educated about IBD, and offer them the tools to become aware.

Why I Stayed Invisible

Becoming #IBDvisible isn’t an easy road, to be sure. In my life, I spent many years hiding my diagnosis of ulcerative colitis, in large part for employment and insurance reasons. Oh, and of course, there’s that little problem that people usually assumed you were mentally ill. I’ve been told many times, in no uncertain terms, that I made myself sick and that it was my “Type A” personality that caused my IBD. (These people don’t really know me: I’m not “Type A” at all.)

In order to get a job and keep a job so that I could enjoy being insured and receive treatment for my disease, I hid my disease. And, to be sure, no one at my place of work (or at any place of work) should ask or expect to know the intimate details of my health. However, I had to go to great pains to avoid looking and acting like a sick person. Becoming a freelance writer, editor, and educator has been the best thing that ever happened to my health: I no longer have to skip doctor’s appointments or make excuses to leave a meeting in a hurry (think about how hard it was before mobile phones! I had to fake a coughing fit!).

The second best thing to happen to my health was the Affordable Care Act, which made it illegal for insurance to discriminate based on past health history. Now I don’t have to worry that my insurance company can drop me because I have a long history of ulcerative colitis.

When I first became #IBDvisible it was still the early days of the Internet. There was almost no chance that people at my workplace would do a search and find my site on IBD at what was then About.com and is now Verywell. In the beginning it was a way to give back to the IBD community that had supported me through my j-pouch surgeries. It has since turned into a driving force behind my life and a way for me to turn around this disease that has taken so much from me, and morph it into a way for me to increase IBD health literacy and thereby improve care for people with IBD.

Being open about a diagnosis of IBD at work or with friends and family is a very personal decision. It’s also a brave one: discrimination against people with chronic illnesses is real. When you interview for a job, you can be certain that the interviewer has searched your name on the Internet. When friends and acquaintances learn about your illness, they may rally behind you or they may decide it’s too much trouble to be friends with someone who might cancel plans at the last minute or need a ride home from a colonoscopy. For these reasons, I don’t blame anyone who keeps their health status private.

On the other hand, opening up about the struggles that IBD brings offers benefits that can’t be gotten anywhere else. That doesn’t mean you have to start a blog or found a nonprofit, but you can be open about your illness in your everyday life. Connecting with others who have IBD is both powerful and profound. When you meet people with IBD, especially those whose disease trajectory is similar to yours, you will immediately feel a closeness that you won’t find anywhere else. The IBD community is welcoming and open with information. This helps everyone with IBD as we share tips and tricks for living with the disease as well as support each other in times of need. There are many couples who have connected because of their IBD (I’ve even been to weddings).

As we share information and experience, we have made great inroads in increasing public understanding about IBD, that it’s not a “pooping disease” and is not a result of mental health issues or a poor diet. It’s not only good for us as people who need to have jobs and friends and live in the world, it’s also important in order to increase funding for IBD research. As we spread the word about IBD to our connections, we increase our ability to find new treatments (and I don’t mean just pharmaceuticals, I also mean diet and surgical procedures) and improve those that we already have. We increase the ability of people with chronic illnesses to go to school and have a rewarding career, and not get dismissed directly out of hand as being unemployable because of a diagnosis.

People with IBD are living in an optimistic time: treatments have come out of the dark ages and patients are living better lives than ever before. This is in no small part a result of people with IBD everywhere who have made the decision to be #IBDVisible. If you’re ready to come on this journey, the IBD community is ready to support you.

Looking to do more? Connect with the Crohn’s and Colitis Foundation of America and learn how you can become #IBDvisible.

An infographic from the Crohn’s and Colitis Foundation of America (CCFA) that can be shared in order to help people without IBD to understand the extent of these diseases.
Image © CCFA