My first gastroenterologist came to me by circumstance. I was referred to a different physician in the same practice, but when I needed to get in sooner, he was the one that had room in his schedule to do my colonoscopy. He was the one that diagnosed me with ulcerative colitis, and sweated over my case in those early days when I was struggling to hold on to my colon. 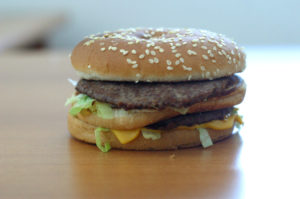 It might not be everyone’s favorite, and it’s certainly not health food, but I still love them.
Image © The D
http://www.freeimages.com/photographer/TheD-29809

At some point after we’d managed to turn things around and I finally stopped bleeding, I came in for a follow-up to his office. I’d been on a low-fiber diet for quite some time, because that’s how treatment went in those days. I’m sure I felt deprived at times but I remember mostly being grateful that I could eat at all. In the hospital I received nutrition through an IV and could eat no food, so even soft low-fiber foods were a step up. I’m sure I wanted a green salad, but a steady diet of turkey and mashed potatoes was the thing that was going to put the 20 pounds I needed back on my body.

Not Exactly “Remission,” But As Close As We Could Get

At this visit my gastro was pretty pleased with my progress, which meant gaining weight, a lowered white blood cell count, a raised red cell count, no bleeding, and no diarrhea. In those days I mostly refused to act like a patient. I would stand in the exam room: I didn’t even sit on the table. It might have had something to do with the massive amounts of prednisone and the resulting mood swings. My physician looked at me and asked me what it was that I missed most when it came to food.

The Most Decadent Food I Could Think Of

Now, I don’t know why he asked me this question. It’s honestly not one that I would have expected from a specialist. Maybe we were talking about how a restricted diet could get old, especially when feeling better. I looked at him and I said “a Big Mac.”

Before you start thinking about the relationship between diet and IBD, let me stop you right there. I was not a frequent fast food eater, by any means. I grew up eating home cooked dinners which often included fresh or canned vegetables from our garden. Diet is not a cause of IBD and it did not contribute to my disease. This is also partially why a Big Mac was an exotic thing to me that represented everything that I should not be eating, given my current battle with ulcerative colitis. I didn’t normally have fast food, it was a treat and a luxury.

My physician reached into his pocket, took out his wallet, and gave me a five dollar bill. He told me to go get a Big Mac.

How Far An Act of Kindness Reaches

More than 25 years later, I remember this particular doctor’s visit so clearly. I had so many office visits in those first years after diagnosis, and if you can believe it, even more today. But it is this one moment in particular that I can remember vividly. I remember what I was wearing, I remember being full of prednisone-fueled teenage angst, I remember his face. I also remember being speechless.

He told me some time later that I should write more about IBD. It’s almost eerie to think of it now. I wanted to be a scientist: I wanted to join the Peace Corps (spoiler: you can’t when you have ulcerative colitis) and go to college and test soil samples and water samples and change the world. I didn’t want to write about my experiences (and, of course, I was 17 and I knew everything).

Sometimes when I think of the cruelty and heartache that having IBD causes—the relationships it sours, the opportunities it takes away—I also remember my gastroenterologist handing me a five dollar bill. At the time it was a means to an end, it was five dollars to buy a meal. But later I realized it was actually hope. He gave me his hope that he had for me. The hope that I would continue to do well and go to the college of my choice and have children one day as we had discussed.

I know our doctors suffer with us as well as celebrate our successes with us. When I feel myself losing hope I think of my physician, and the small, yet significant, kindness he extended to me that day. Even a small gesture can have a ripple effect, and this is how we must think of our interactions with others, and especially to those that are experiencing a crisis or pain. Kindness is our way forward and the raft we must cling to as we support one another in our journey through IBD.