Between the time when I was misdiagnosed and the time I received an actual real diagnosis, I had my first appointment with a gynecologist. At this visit it was discovered that I had a urinary tract infection. I was put on antibiotics (again, I don’t know what the exact drug was), which was probably not the best idea for my gastrointestinal tract, though the infection had to be stopped before it could cause further damage. I would go on to have many, many urinary tract infections over the years and have seen several urologists, who can find nothing physically wrong, and can only prescribe more antibiotics.

Before even seeing me in the office, the first thing the gastroenterologists wanted to do was a colonoscopy. By this time, I had constant diarrhea. It was always bloody, and at times it was nothing but blood. I remember doing nothing but going between my bedroom and the bathroom, all day and all night.

How My Mom Got The Doctor’s Attention 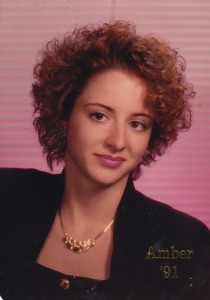 My high school graduation photo, thankfully taken after tapering off prednisone and before my second big flare-up in the fall of 1991.

It was going to take time for the gastroenterologists to fit me in for a colonoscopy, but my mother called them and had a very frank discussion with the receptionist. I think the endoscopy appointment might have been a week out, and my mother was telling them that we needed to be seen sooner than that.

“I don’t think she’s going to last that long,” she told them.

The diarrhea was bad enough that I didn’t prep for the colonoscopy that time. I recall getting ready to go, putting on some sweatpants and my favorite t-shirt, which had an Egyptian flag on it. When we arrived at the hospital there were a lot of questions and of course I was fitted with the hospital arm bracelet.

I’m sure someone explained to me what was going to happen, but I don’t recall. I do remember putting on the horrible hospital gown and being covered with blankets. For some reason, endoscopy is always freezing, and hospital gowns just won’t keep you warm. As they were wheeling me into the colonoscopy room, there was another patient that was receiving an x-ray at bedside. The nurses wheeled me around the corner in order to insulate me from the radiation. I don’t know if that was actually effective, but they told me why they did it.

“We have a young lady here who might want to have children some day!” one of them said.

I appreciated the sentiment, but at the time I really felt like I wasn’t going to be capable of doing very much at all in my life. At 16, having children seemed impossible and very, very far off. But they were right. I did want to have children in the misty, far off “some day.”

They would have started an IV, and I don’t remember it being traumatic so I must have had someone very experienced do it. Not only do I have small veins that like to roll, but at this point I was horribly dehydrated. In many cases nurses have had to use needles on me that are meant for children or even babies. I received a rehydration solution through my IV, and was given some sedatives.

Of course, colonoscopy usually involves sedation, or what they call “twilight sleep.” This has the effect of some pain relief during the procedure (and not just from physical pain, but also from the pain of embarrassment) and it also causes you to forget what happened. I don’t think they had a screen visible to me during this first colonoscopy. In later visits, I would ask to see the screen, but I don’t recall being able to see it this first time. I probably was not aware that there was a screen that I could watch.

I recall being asked to lay on my left side, and the doctor telling me that he was going to touch me. By then I was deadened from the sedatives, so I probably wouldn’t have startled anyway. Of course they would have lifted the blankets off my backside and opened my hospital gown. I don’t recall the rest of the procedure at all. I was told later that they really didn’t go that far into my colon — they saw what they were looking for and got out. It was pretty clear what was causing the bleeding.

Recovery Is No Fun At All

After the procedure, I was wheeled into recovery. Recovery from a colonoscopy is a strange place. They bring you out of twilight sleep, which is really a bummer. You slowly come back to yourself and usually patients, especially those for routine colonoscopies, are given something to eat or drink. Of course, I was given nothing.

In recovery you hear a lot of flatulence. You have to get all that air that was pumped into your colon back outside you again. The best way to do that is usually to lie on your left side and relax.

In my case, the gastroenterologist came in to talk to my mother and I. He asked me a strange question.

“Do you know what raw hamburger looks like?” he said.

Well, of course I did. I knew how to cook.

“That’s what the inside of your colon looks like,” he said.

The inflammation was currently in my sigmoid colon, which is usually how things start with ulcerative colitis patients. The sigmoid colon is where it starts and the inflammation can spread up along the colon over a period of time. The most interesting thing to me was that this was only taking place in the last section of my colon, but I was horribly ill. I had constant, bloody diarrhea, and it turns out only a part of my colon was affected. It should have been good news, actually, but at the time it seemed horrible.

What I didn’t know was that the really bad news was yet to come.