I hadn’t given too much though to my relationship with food until recently when it occurred to me that my experiences with IBD have influenced my diet since diagnosis. In the IBD community people often share ideas about diet and nutrition, and what we eat is all very different. It has taken me a very long time, but I’ve come to understand that IBD has probably had a strong influence on my relationship with food — and not in a positive way.

Yes, this is how I went to prom, in full prednisone moon face. My weight may have been in the 110 lb range at the time, but my face was quite distorted.

As a child, my mother has said that I “ate well.” I was the kid who, when sent out to the kitchen garden to pick tomatoes or beans, would eat them on the way back to the house. As I teen I ate a lot of salad —  I would chop up carrots and celery and peppers and cucumbers and whatever else was on hand and add some ranch dressing. We weren’t so concerned with diet in the 70s and 80s, but I think my family did pretty well. Eating out (even fast food) was a rarity.

This all changes of course in 1989 when I am diagnosed with ulcerative colitis. I don’t eat much between the onset of symptoms and my diagnosis, and am down to 89 pounds when I am hospitalized. Treatment then included gut rest, which meant not eating or drinking anything. I was watched when I took medication by mouth and when I brushed my teeth, to ensure I didn’t swallow too much water. I had a central line (a central venous catheter) placed in my chest because the veins in my arms couldn’t support the liquid nutrition I needed. This is all pretty common for treatment of ulcerative colitis at that time, and even today, in some cases.

This Is Not My Idea of A Good Time

Aside from not being allowed to eat in the hospital, I often starved myself at home too, thinking that was what would keep me out of the hospital. My senior year I flat out refused to be hospitalized at all, and instead went on high doses of prednisone at home and a liquid diet. What I know now that I didn’t know then is that this is not the right way to treat IBD. This is not healthy. This is not what any IBD patient should do. Ever.

I have no idea how I had the willpower to be on liquid diet for weeks on end, sometimes eating a piece of white bread with butter. Maybe it was because the pain of not eating was preferable to the pain and the bleeding of the ulcerative colitis. I had no control over my weight — it went up and down of its own accord (mostly down). Other women were envious of my “figure” which could best be described as a “stick figure.”  An extra small is what we’ve been socialized to think is sexy, but it was an extremely unhealthy size for me.

No Longer Starving, But How Do I Cope With My New Normal? 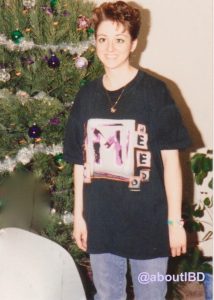 In college, no longer on the prednisone, but unhealthily thin. People called me “skinny,” and oversize t-shirts and jeans were pretty much what I wore all the time.

Now, today, years later after having j-pouch surgery, I still do not have an appropriate relationship with food. Since the age of 16 my diet has been restricted. I was put on low-fiber diets first to treat IBD and then after my surgeries. I ramped up my fiber consumption after I healed, but there’s still only so much I can take without causing myself discomfort. I still love salads and eat them regularly, but one small salad (well chewed, with lots of water) is about all the roughage I can have in a day.

I love food. I LOVE food. I mean, I loved food before, to the point where my dad would laugh at me because when I made a sandwich, for instance, you bet I got that mayonnaise all the way to the corner of the bread. I was a little particular about it. But that’s my personality, really, and I never much actually thought about food. It wasn’t like I got terribly excited over the idea of a really good meal. Today, I even ask other people what they ate after they went somewhere special. I can sustain a craving for a particular food for weeks.

Disordered Eating: Another Part of IBD?

Weird, right? But I’m coming to understand that this is not so uncommon in the IBD community. How could we possibly have a healthy relationship with food? Our lives revolve around meals to a ridiculous degree. Every single one of us eats differently, although there can be some similarities. The bouncing back and forth between eating and starving can’t not take a toll. I’ve been told by multiple IBD specialists that people in an IBD flare-up need more nutrients and not less. In other words, starving ourselves isn’t the thing to do, but most of us do it.

I’m getting a handle on my food issues. Being able to eat real, good food as a result of my having j-pouch surgery is amazing and I’m grateful for it. However, I know on an intellectual level that food is fuel and that I shouldn’t look upon it differently than that. Food is to be enjoyed, but in a healthy way. I’m still figuring it out as I go along.

If You Want Support, Here’s What To Do

No one with IBD should have to decide out how to eat properly by themselves. If you have concerns about disordered eating, don’t hesitate to discuss it with your healthcare team. Your gastroenterologist, dietician nutritionist, or primary care physician can help you if you want more assistance in regards to diet. If you’re concerned about disordered eating and would rather not talk to one of your own physicians right now, contact National Eating Disorder Association, http://www.nationaleatingdisorders.org. They have several ways you can get in touch with them:

As always, the goal is to be healthy and to eat right for your body. If things aren’t going well with your diet, it’s time to think about making a change. Changing thought patterns in regards to food and diet isn’t easy, but it can be done. People with IBD should be able to take pleasure in a meal, the same as anyone else.