An elevator speech or elevator pitch is a quick summary of a topic that can be given in about under a minute: just enough time to take an elevator ride. It’s usually thought of in a business sense, like a sales pitch or an idea you have that you present to someone in management upon a chance meeting (such as in the elevator). The use has been expanded to mean any prepared and rehearsed speech that you can give quickly on a moment’s notice. The purpose of this article is to guide you on crafting your elevator speech about your inflammatory bowel disease (IBD).

The elevator speech has a bit of a negative connotation in some circles. It could be a result of people using a sales pitch in less than ideal circumstances (and most people don’t like to be on the receiving end of such a pitch that takes them off guard). It also has a reputation in the business world because it’s not unheard of for a c-level executive to ask difficult questions of employees upon a chance meeting, and therefore some employees would spend time crafting responses in order to be prepared if it ever happened to them.

In our case, however, we are creating our elevator speech because we want to spread information. This helps those around us can recognize what we’re coping with personally and to enhance a greater understanding of the broader topic of IBD. 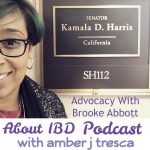 Are you interested in taking your elevator speech to the next level? Learn how to better advocate for yourself and for others living with IBD through listening to this episode of About IBD with ulcerative colitis patient and IBD activist Brooke Abbott.

Listen to the full episode here:
About IBD Podcast 10 – Advocacy With Brooke Abbott

Why You Need An Elevator Speech

IBD is, of course, in our daily lives and it’s not uncommon to run into someone who not only has no knowledge about your personal health history but may also not know anything about IBD. Or, in some cases, may have incorrect assumptions about IBD and the people who live with Crohn’s disease and ulcerative colitis.

In those cases, having a prepared speech is really helpful for a few reasons. The first being that when you have a few sentences memorized (or even the basic idea) you don’t have to think much about it and can launch into it with almost no effort. Another reason is that it helps you to get the salient points across quickly, instead of later realizing you missed bringing up a few important topics. The last reason is that, well, nobody wants to be caught off-guard and to stumble over words, and being prepared will make sure that doesn’t occur.

What Should Be In Your IBD Elevator Speech?

After living years or decades with IBD, distilling all the experiences down to what can be said in under a minute may seem as though it trivializes the experience. For sure, there’s not going to be time to describe every way stop you’ve made along the IBD highway. But that’s not the point of your elevator speech, anyway. The idea is to hit the high points, explaining how this disease has most affected you (or, if you’re a caregiver, your loved one) and adding in a little something more that’s important in the context of when and where and to whom you’re speaking. If you’re involved in advocacy work, such as raising funds for a nonprofit or working with legislators or volunteering at a hospital, that will be an important point to add.

Some Ideas to Get You Started

Crafting your elevator speech from all your experiences will take some careful consideration. Here’s a few questions to think about when you’re creating your speech:

When and Where to Give Your Speech

We call it a “speech” but it’s not as though you’re going to stand in front of a room of people and give it (although if you are involved in advocacy work, that might be something that you do). Your speech will be tailored to time and circumstance and it may be different every single time you give it because it’s a personal interaction between you and the person with whom you’re speaking. It could be that they mention digestive disease or ask if you’re feeling OK that day or are wondering why you were away from school or work.

Your audience should indicate that they are receptive; you don’t want to engage people in a topic for which they are not prepared to discuss. In addition, your speech should be short enough to keep attention and not so long that your audience feels as though they’ve been cornered. If they want to know more, they will ask questions, and that is often the greatest outcome to giving your elevator speech: letting one more person in on your journey and perhaps helping them to become an IBD ally.

Your Journey Is Your Own

Once you’ve thought about what IBD has meant to your life, and what you’d like to tell perfect strangers about IBD, you can draft your elevator speech. You might want to even practice it, try it out on a few friends or in front of the mirror. As you become practiced with your speech, you’ll have more confidence when you deliver it. You might even decide in the end that you don’t want a formal speech, but instead tailor what you say to the circumstance. The goal is to not be caught off-guard, and be able to speak intelligently about IBD so that a chance encounter leaves you feeling empowered, and someone else more educated.