I’m not exactly sure what to call this feeling, so for a lack of a better phrase, I’m calling it “IBD survivor’s guilt.” This is not to take away from people who have lived through an actual horrific event, and have true survivor’s guilt. This is clearly not even close to being the same thing. But I think I’m probably not alone in this yet-unnamed feeling in the IBD community. 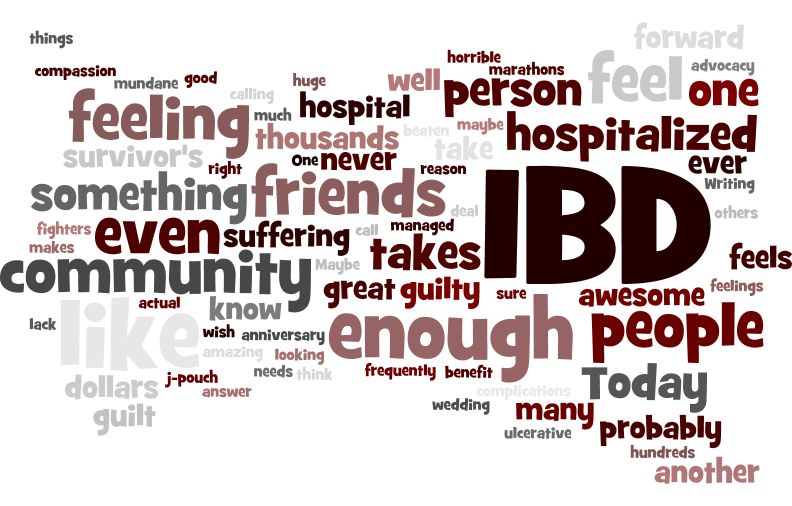 How do we cope with this grief? I don’t have any great answers. I just deal with it like I do any other emotion connected to IBD.

One of my friends is hospitalized — again. This happens frequently in the IBD community, because many people with IBD are in and out of the hospital on a regular basis. It could be for something major, or something comparatively minor, but the hospital is never where anyone wants to be, of course.

I haven’t been hospitalized for my IBD in years. I do really well with my j-pouch. That’s not to say I don’t have my moments, and there were times I probably should have been hospitalized, but I haven’t ever been sick like I was with my ulcerative colitis.

I do well enough that I have children, and a career, and a mortgage, and a car payment. I built a life. But so many of my friends are suffering. And they’re awesome people. (Because IBD makes you awesome.) And here I am, looking forward to dinner and a movie with my husband for our wedding anniversary, truly living and breathing only because of the great skill of my physicians and surgeons.

And I know that there’s not one person in the IBD community who would wish this illness on another person, not for any reason. It’s too horrible and it takes too much from us. Not only does it take from the person who lives with IBD, but it takes from their family and friends. I would even argue that it takes from the world, because if these amazing people I know weren’t constantly being beaten back over and over with IBD and IBD-related complications, they would be doing even more great things to benefit others. And they already do their fair share.

I don’t have a good answer on how to deal with this feeling. Writing obviously is one way I cope. Trying to help and be supportive of my friends in the IBD community is another. But it’s not enough. And maybe there’s nothing that I could ever do that would feel like “enough.” Maybe it’s just a feeling that needs to be managed, but one that can also spur me forward when I have compassion fatigue or writer’s block.

Come to think of it, maybe, in this small way, my guilt does serve a terrible, but necessary, purpose.