Many people with inflammatory bowel disease (IBD) will admit to having a body image issue. The research shows that people with IBD who have a healthy self-image are in the minority. After all, how could we not have issues with our bodies? Our bodies fail us without warning, not to mention the symptoms of IBD which are often distressing and personally upsetting to oneself and to others.

It’s funny, now as an “over 40,” I think back on the days when I was younger and I have to laugh at my skewed sense of self. The facts that support my internal monologue on body image will surely upset those who were closest to me when I was a child and a teen. We didn’t have the vocabulary to discuss things like body image in the 70s and 80s and there wasn’t anyone who told me the things I tell my daughter, that her body is strong and beautiful and that we will do our best to take care of it.

Nobody wants to appear vain or self-centered and admit that they’re comfortable with their looks, but I really did think I was difficult to look at. After all, so many people told me that for most of my life, starting as a child. And maybe I was a bit of an ugly duckling, I think I got more attractive (whatever that means) as I got older, but I could never shake the feeling that my worth was tied to my physical appearance. Even to this day, I’m not interested in being the center of attention, which doesn’t mesh well with my chosen profession and my Instagram feed.

Being a Teen With IBD 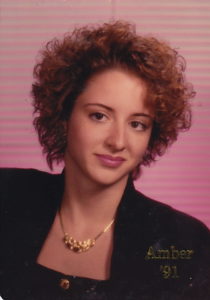 In contrast, you have my senior picture which was taken about 10 months prior to my prom photo. I was off prednisone for several months by that point, and only taking sulfasalazine. It turned my hair redder and made my skin appear more orange.

After being diagnosed with IBD as a teen, I didn’t date a lot. Although I’m not really sure what “date” means — what it meant in the late 80s and early 90s or what it means today. The romantic idea of a boy or a man coming to your house and picking you up in his car, taking you out for a movie and dinner, it doesn’t seem to happen that way anymore. More often you meet someone through friends, you hang out together, and at some point you decide if you’re going to be exclusive — or not. It wasn’t until I went to college that it become more of an official “hey, do you want to go out with me?” conversation. And even then, there were a several false starts that never went anywhere.

In my quest to stay out of the hospital as a high school senior, I was prescribed prednisone. High doses of prednisone. That left me with the puffed-up cheeks or the “moon face.” I took my moon face to prom. I took my moon face to graduation. I took my moon face to parties. Forever immortalized in the photos of several other people, 100 pounds soaking wet with these giant cheeks and a horrible case of acne due to the medication. I wanted to hide, but there’s nowhere to hide from yourself, is there? I was powerless to stop any of it, so I went along with the tide as well as I could. Which was probably not well at all. I certainly had my share of meltdowns about my (lack of) social life.

In every case of my social life, I went to great pains to hide everything. I didn’t know how to start the conversation about IBD and I absolutely kept my scars and stretch marks covered. Big t-shirts. Long shorts and skirts. Dark tights. Boots. No one saw my skin. Even with serious high school and college boyfriends, I’m not sure I ever talked with any of them about IBD. I was managing to stay out of the hospital (actually more living in denial of my unrelenting symptoms), so that didn’t force the issue.

Even then, when someone had interest in me, I was always looking for the “motive” or the “problem.” I mean, what was wrong with them that they couldn’t find someone better? Or was I being used for some purpose? I came across as closed off, because I wasn’t ready to give anything emotionally and get myself into a situation I couldn’t find my way out of. I had no self-worth, I did not think I was worth dating, and I certainly did not think I was attractive to men. I knew other women who dated frequently, who had sex with whomever they chose, and I felt like I was outside of it all. An observer.

What a shitty way to spend your 20s.

Now, as a married mother of two, I’m invisible. I’m out of “the game,” but for an entirely different reason. It almost makes issues with body image easier. I’m not “supposed” to be attractive or desirable, except to my husband. I don’t feel as though I’m in a constant battle with myself to be something (what? I still don’t know) I’m never going to be. And yet, I haven’t solved this problem of a poor body image. My body is admirable — it conceived, grew, gave birth to, and sustained two humans through infancy. I know this objectively, but I don’t really take it into my heart.

My Hopes for You

I think about the young people who are dealing with a poor body image right now, today, because of IBD, and it’s my great hope that they can find a better way to cope with it than I did. Every person deserves kindness and respect, and no person should think that they are worthless because they are sick. I had some counseling as a teen, but I don’t think it was enough, and I was never offered more. Today there are counselors and other mental health professionals that specialize in treating patients with IBD — and they are so incredibly compassionate. If you find yourself struggling with body image issues, I hope that you can reach out to someone who can help you.

There’s already so much suffering because of IBD, you shouldn’t also have to feel that you’re ugly or too skinny or not worthy of love. Because you are loved, even if you don’t believe it or know how to take it right now.