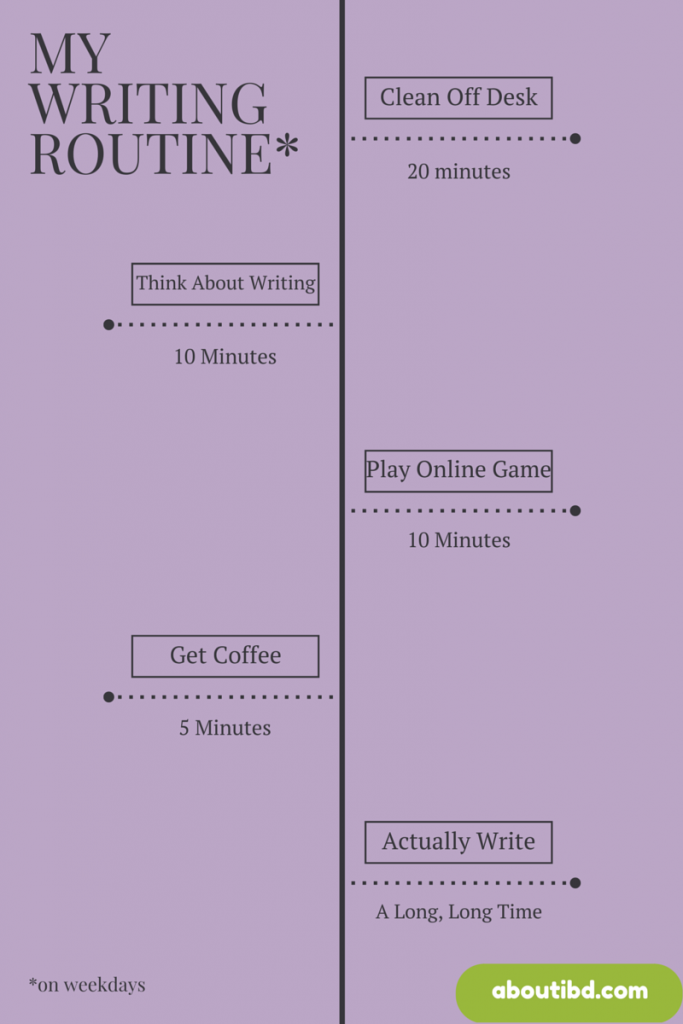 Everyone has their routine, right? So, I don’t do this each and every time I sit down to write, but it’s a pretty fair description of how most days go. I have to clean my desk off and I have to get coffee, but other things are subject to change.

Frank Garufi Jr of The Crohn’s Colitis Effect asked me a question that I actually get asked all the time, so I felt it was worthwhile to answer in writing.

“Don’t you run out of ideas to write about?’

And actually, no, I don’t. Now, that’s not to say there aren’t topics that I drag my feet on writing, or that I don’t have the resources to write at a particular time. But I never actually run out of ideas.

This is not because I am some great fountain of ideas. Far from it. It is because inflammatory bowel disease (IBD) is not static. The disease itself doesn’t necessarily change, it is what it is, but everything surrounding it does. Treatments change, patients change, clinicians change. Not only am I keeping up with what’s new, I am also constantly correcting what is now outdated.

Medicine moves slowly. It really does. It takes a lot of evidence collected over a long period of time before treatments change and medical guidelines change. However, even over the 15 years that I have been writing about IBD, and in the 10 years I’ve been writing about other conditions, things have changed drastically. We’ve seen the advent of biologics for IBD and other conditions. Those drugs are still in their infancy compared to others, and we are still learning about them. Potential treatments that I personally was convinced were going to be the next big thing for IBD have fizzled out and not been useful at all.

The More Things Change, The More They Stay The Same

Patients have basic needs that never change, but there are other individualized needs that change over time. Patients are getting younger. IBD is now becoming prevalent across the world; it’s no longer just a problem in the United States, Canada, the United Kingdom, and Australia. Countries with rising rates of IBD are feeling the pinch of the costs of IBD, both to their healthcare system and to their population.

In addition to all of this, and despite the fact that medicine moves slowly, we are learning more about IBD. In the past we didn’t know much about the genetics of IBD, and while we now know about the many genes involved, we still don’t know how they all work together. That’s still to come. There are many more treatments now than there were 15 years ago, and more in the pipeline, and we are still figuring out how these treatments affect our bodies over time.

And I haven’t even touched on the social, legal, and financial aspects of IBD, which have also changed drastically over 15 years.

So, the answer is no. No, I don’t have a lack of ideas. If anything, I have too many ideas, and sometimes ping pong between them without getting any actual traction. But, ocassionally, I do manage to put together something coherent and post it.