You may not have heard of biomarkers before, but they are a key part of managing your Crohn’s disease, ulcerative colitis, or indeterminate colitis (inflammatory bowel disease, or IBD).

END_OF_DOCUMENT_TOKEN_TO_BE_REPLACED

What’s in your microbiome and how does it interact with your IBD? The bacteria that’s in the gut of someone that lives with IBD is different from the bacteria in the the gut of someone that doesn’t have IBD. This is a major area of study because it may help researchers not only in developing new treatments but also in better understanding IBD. That’s why I asked Arielle Radin, Director of Clinical Research for Gali Health, to talk to me about the Footprints Program.

The Footprints Program is an ambitious research project that is going to sequence poop and saliva from IBD patients. It’s being used in conjunction with the Gali Health app, which is made especially for IBD patients to track their symptoms and connect with other people who live with Crohn’s disease or ulcerative colitis. Participants in the Footprints Program will get access to some information about their microbiome. They can then look at the changes over time and see if there are any trends with the symptoms that are kept in the Gali app. It sounds pretty amazing, which is why I signed up for the program. Arielle Radin, who answers my questions about Gali Health and the Footprints Program, and on a personal note, tells us about getting married during the pandemic.

END_OF_DOCUMENT_TOKEN_TO_BE_REPLACED

In December 2019 I went to Advances in IBD, which is a medical meeting that’s focused entirely on Crohn’s disease and ulcerative colitis. The understanding that IBD is more than a “bathroom disease” has finally hit home, and attendees (which include healthcare professionals such as nurses, dietitians, gastroenterologists, GI psychologists, and colorectal surgeons) were educated on a variety of topics. In this episode I provide some of the highlights of the meeting including sessions on diet, medication risks, and pregnancy.

END_OF_DOCUMENT_TOKEN_TO_BE_REPLACED

People who live with inflammatory bowel disease (IBD) often have questions about what should and shouldn’t be included in a diet plan. There’s not one single diet for every person with IBD, which presents challenges for patients. Diet is difficult to study because there are so many variables. While more data and research on diet is clearly needed, there are some general guidelines that health care professionals can offer their patients.

END_OF_DOCUMENT_TOKEN_TO_BE_REPLACED

One of the presentations I attended at Advances in Inflammatory Bowel Diseases (AIBD) in Orlando, Florida in December 2019 was regarding the use of 5-aminosalicylic acid (5-ASA) drugs in IBD. The talk, “Don’t Forget that 5-ASAs Also Have Side Effects: Recognizing Complications” was given by Meenakshi Bewtra, MD, MPH, PhD, Assistant Professor of Medicine at the Hospital of the University of Pennsylvania, Philadelphia.

On the face of it, this appeared to be a straightforward presentation on the adverse effects (side effects) of these medications which are used to treat ulcerative colitis. However, there was an unexpected twist!

END_OF_DOCUMENT_TOKEN_TO_BE_REPLACED

On February 26, 2016, I attended an event at the Janssen Biotech facilities in Pennsylvania called The BioExperience. (Janssen is the company that makes IBD medication Remicade.) BioExperience. It sounds like a ride at Disney Epcot: exciting and full of potential. And actually it really was just that. Exciting and informative and something that I would never get anywhere else. I want to tell you a little about what this event was all about.

END_OF_DOCUMENT_TOKEN_TO_BE_REPLACED 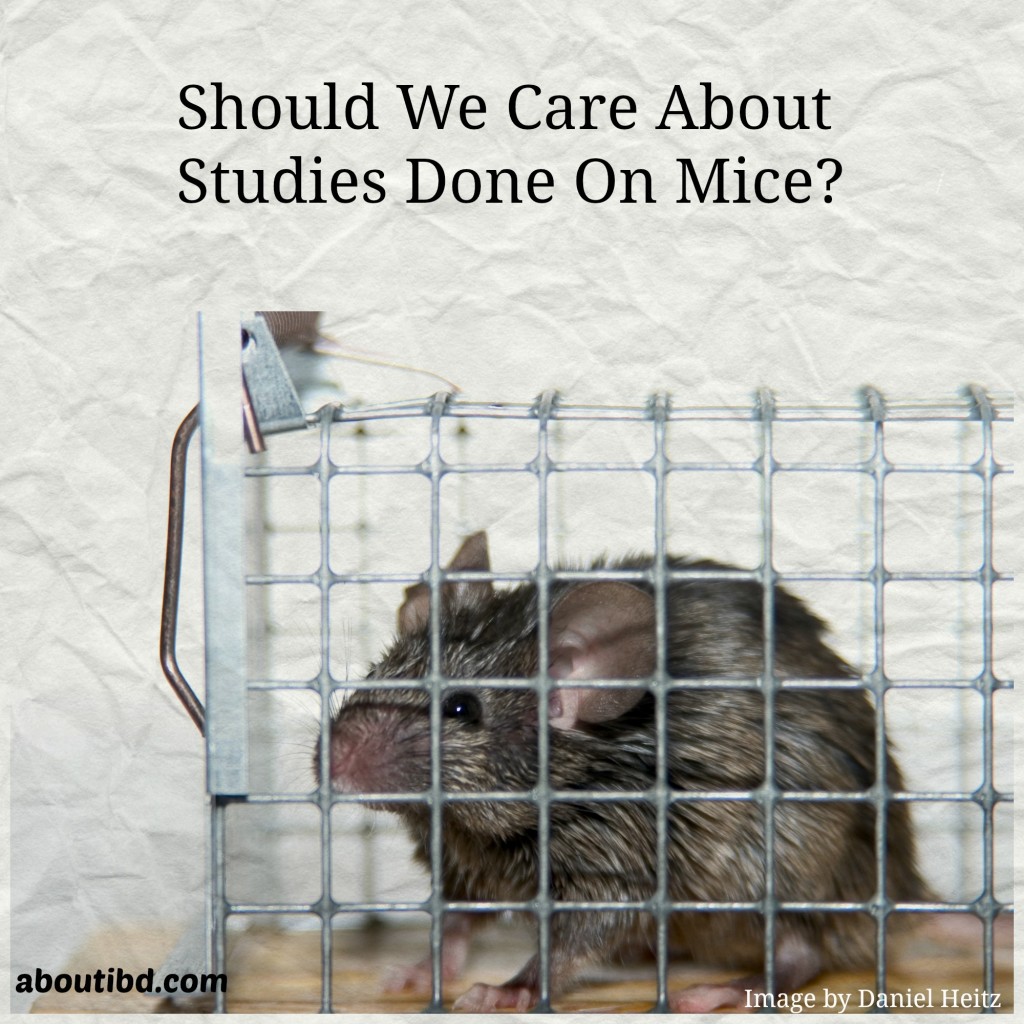 Aww, the poor mice. Mice studies are important because they are a first step. But they’re just that — preliminary results that may or may not lead to something meaningful for patients.

I often make a joke that when I see a study done on mice or rats my eyes glaze over and I move on. I don’t, really, of course. I read them and will watch future research to see how things pan out, and if more study moves the knowledge further and leads to anything significant.

However, I don’t usually write up a summary or include it in an article as a reference. This is because I’ve learned that most people aren’t interested in reading about mice studies.

The other reason that I don’t often report on them is because they often don’t lead to anything. The mainstream media, however, often gloms on to these stories as if they’re going to change everything for patients. But they don’t, at least, they won’t for a long time. END_OF_DOCUMENT_TOKEN_TO_BE_REPLACED